An apartment in Paris

Our flight to Paris was short and no frills. The seats were cramped and they charged for all food, even soft drinks (Aer Lingus). We ended up in mysterious Terminal 1 to pick up our bags. I’d seen the round terminal from the plane and wondered what it was–as no planes were parked against it. That Star Wars plane is just passing by. 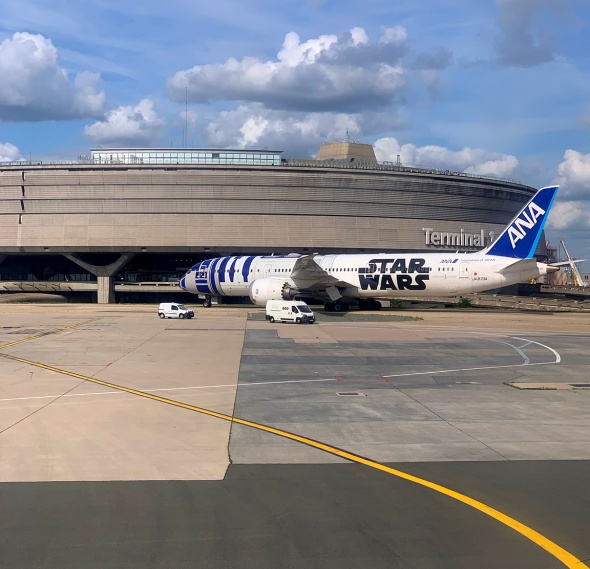 Turns out it’s a doughnut, with the hole in the middle filled with escalators! 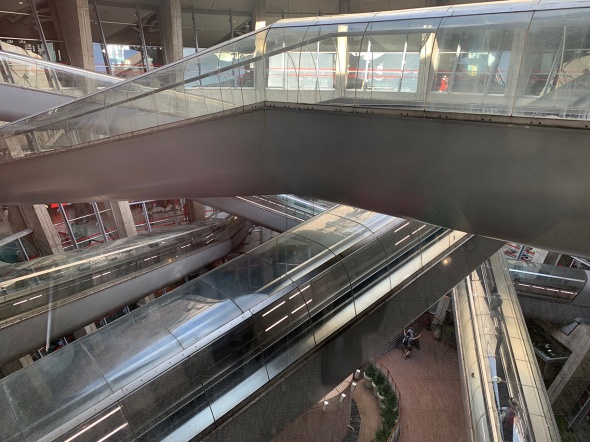 Inside of Terminal 1 is open to the sky and full of escalators. R. gets the photo credit.

We took the RER to Chatelet les Halles, and hard a hard time getting a cab but then – straight down rue du Rivoli! Paris!! I felt so happy to be back. No offense to Dublin, but it ain’t no Paris! 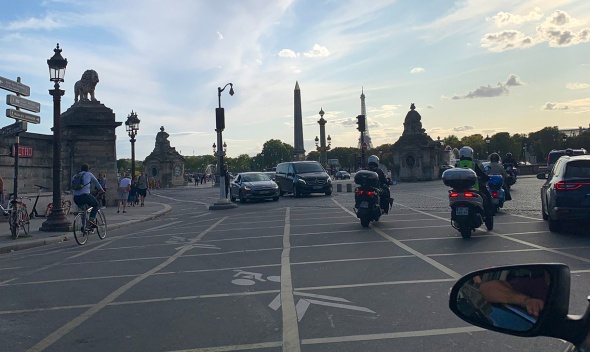 This isn’t a great photo, but the point is, even a crappy view from a cab (with the driver’s hairy elbow) includes the Eiffel Tower, an obelisk, a fountain, a metro sign, the Grand Palais, cool streetlights, a statue of a lion, and SO MUCH PARIS.

Our apartment was on a street with fancy, high-end stores and a $$$$$ hotel, but the building itself was pretty run down. The inner ground-floor door had badly cracked glass and was permanently unlocked. The elevator barely fit two people so the rental agent took our bags up and we went up after. When he moved our bags to open the front door, a piece of baseboard fell off. The wall outside the apartment was patched and stained.

Inside, the apartment was fine. Spacious as promised, with furnishings in good repair, original if slightly sad art on the walls, and a kitchen with all the basics as well as a dishwasher and washer and dryer. 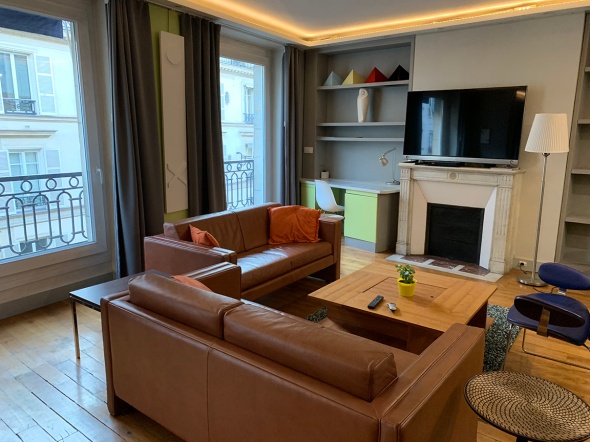 I worked at the desk there in the back all week. It was a good setup.

The bathroom was a student art project gone wrong, with mirrors on all 4 walls including the inside of the shower, and the whole place stank of mildew. Seriously, when you are in Paris eating croissants you do not need to see your belly reflected into infinity in the shower.

Unfortunately the master bed really was a double. Truth be told, I had a hard time finding an apartment (at the last minute) and I looked at so many and all had weird beds – like you could tell they pushed two twins together. I ended up looking for two bedrooms because the ones were sold out, and tried to get one with a real king but the owner didn’t respond.

So there we were with a small double. R. was not happy. I struggled all week to figure out how to sleep on it. I basically stuck to the edge and tried not to move.

I had to get to work the moment we arrived because it was Monday, and Monday was a work day. The desk was perfect, big and deep and fit my monitor…ugh. The monitor. Chagrin. I have a monitor I bring with me when I travel. It fits perfectly in my suitcase. I surround it with shoes and rolled up shirts and top it off with my pillow and…I forgot it. I had to buy another one in Dublin and have it delivered to the hotel.

I worried about how I’d deal with being in Paris and being shut in and working, but it was a relief. Being a tourist is exhausting. I was tired after Dublin. Running back and forth to the conference, fitting in sight-seeing in between panel sessions, figuring out what to see, when things are open, how to get there, etc. and then being hungry and tired and trying to find food that doesn’t suck…day after day. Also I don’t like to be gone from work so long that I lose track of what’s going on and lose my “work brain.”

I worked from 3-10 (the internet was great) and got my head around things after not checking in at all while we were in Dublin. R. ordered great Thai food and we ate and chilled at home.

Tuesday I woke and went out early for a pre-work walk – and damn I was happy to be back! Paris is so pretty and just so Paris! I hadn’t been in five years. It’s hard to remember why I like it so much when I haven’t been in so long, I just knew I did, and the moment I stepped out of the apartment it hit me all over again and I was so happy. 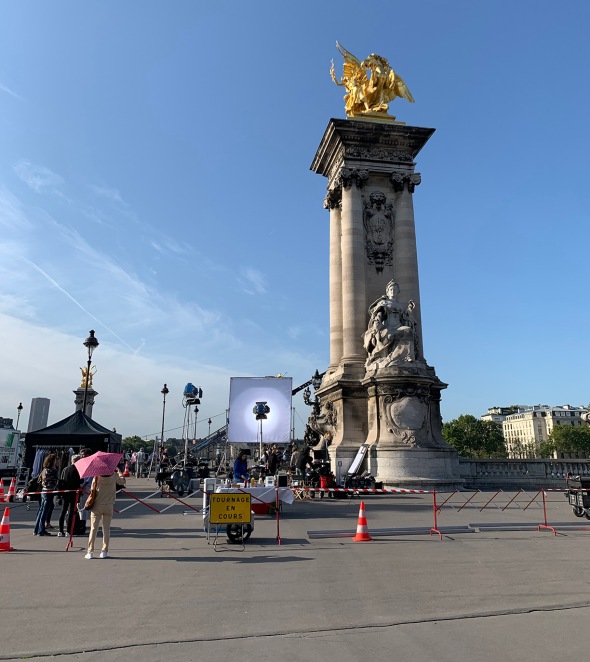 Of course it’s the style. It fits together so harmoniously, and in large part due to the renovation by Haussmann in the mid- to late 1800’s. Previous to that, if this quote from Wikipedia is to be believed: “In 1845, the French social reformer Victor Considerant wrote: “Paris is an immense workshop of putrefaction, where misery, pestilence and sickness work in concert, where sunlight and air rarely penetrate. Paris is a terrible place where plants shrivel and perish, and where, of seven small infants, four die during the course of the year.”[2]“

The odd thing is I wouldn’t like this style anywhere else. I don’t, in theory, like bridges with tall columns with gold deities atop them, but I like that here. I wouldn’t put a wrought iron railing on my balcony at home but in Paris I’m charmed. 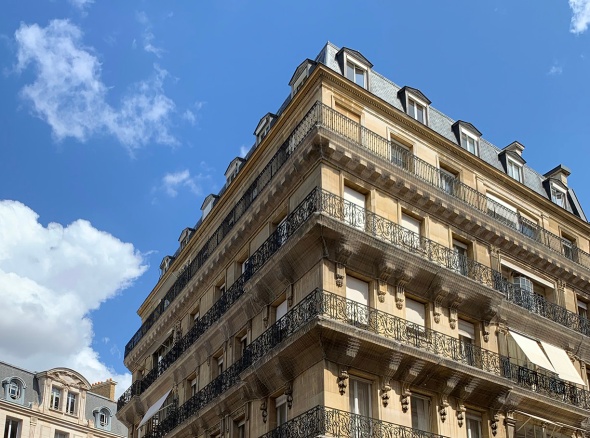 What I also like is that the city is alive! Yeah, I like the unified style, but they aren’t afraid to do modern as well. Everyone seems to acknowledge that they are living with a partner with a very strong personality – and they work to incorporate the present not apologetically but boldly. (Pompidu Center, pyramid at the Louvre, new Les Halles).

I dunno why this surprised me but Paris is overrun with scooters and shared bikes, just like San Francisco. I thought the special historical bubble would mean Jump bikes weren’t laying all over the place but there they were! I’m not opposed to this as I immediately signed up for a 7 day pass to Velip, the bike service equivalent to the rental bikes I use at home. I loved biking around. It made the city so much more accessible. Plus it was hot and walking in the beating sun is no fun, but biking was great! There are a fair number of protected bike lanes and more are being built. There are also protected bus-only lanes where bikes are allowed. The oddest bike path was a half-mile (?) long former tunnel for cars that ran underground along the Louvre. Super creepy with just me riding through it. 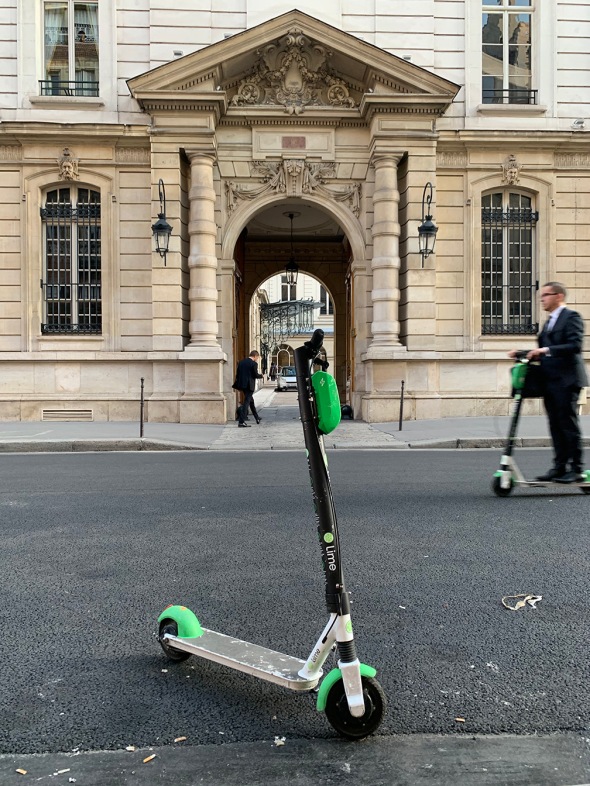 Why I “love” Paris

How I came to love the idea of Paris is probably typical for many U.S. suburbanites who live in bland cities with little history or grandeur. In fourth grade I began French class. Previous to this, I had no concept of life as it might exist outside of California. A faraway trip was to Los Angeles or Lake Tahoe. Strangers were people in cars you weren’t supposed to talk to. When I got my French textbook, I was amazed by the black and white photos of the Eiffel Tower, Notre Dame, and people wearing berets and riding bikes with baguettes in the basket. Add to this they had a whole different language? My mind was blown.

Our French teacher, Madame Holden, was very French, with a heavy accent and a tendency to burst into tears when we were bad – which was often.

A mashup of romantic Paris scenes wormed it’s way into my head through books, movies, and art/art history. Part turn-of-the-century belle epoque drinking and dancing, part 1920’s literary cafe scene, part modern day lovers strolling the Seine with a bottle of champagne – I can’t think of any other city (even New York) that lived so actively in my imagination. I almost forgot – Babar, my favorite childhood character, lived in Paris. 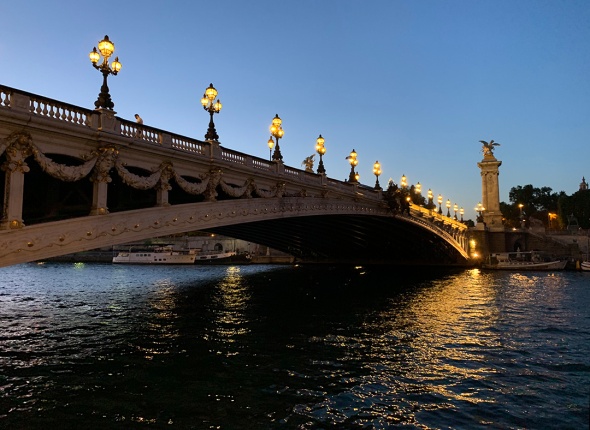 After college, I saved money for a year and then went on a six-month study abroad – of course in Paris. It was my first trip to Europe, and I was beyond nervous. I remember emerging from the Metro at Châtelet Les Halles and being amazed as St. Eustace (a Gothic church built in the 1500’s) rose into view.

My time in Paris and environs was everything I dreamed it would be, but what is funny is that I barely spoke to a French person the entire time. I was terrified of being revealed to be an American. They were worldly and cool and I was not. I walked the streets day after day and soaked up the atmosphere, more ghost than person, especially given I didn’t have much money and couldn’t afford to shop or eat out (breakfast and dinner was included in our dorm lodging). 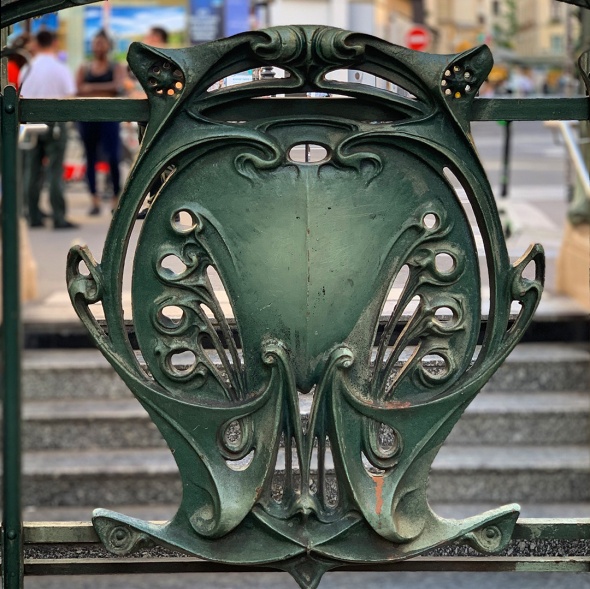 Anyhow, the point is, my love of Paris was and is aesthetic and superficial, but so what? What’s the harm in innocent enjoyment of a place? I love San Francisco, which is beautiful, but I’m also caught up in local politics, annoyed by persistent problems like disruptive construction and streets with potholes, etc. Regular day to day stuff that you don’t know about or notice as much as a tourist. Eh, except for the construction noise. Oh right, and the garbage collection. Actually Paris is pretty noisy. But you get my point. I can forgive it for a week. 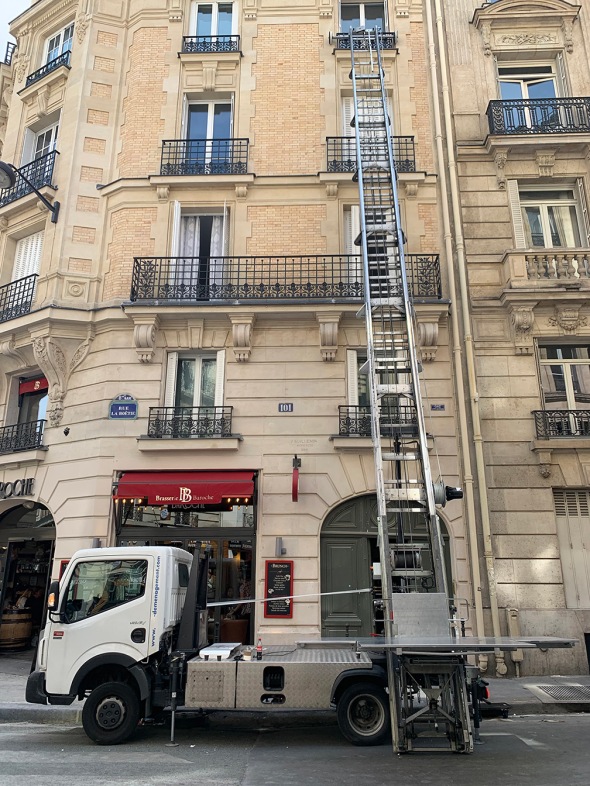 How to move furniture in Paris

I don’t need to do a play by play of all the days. Monday – Friday went like this. I’d get up, shower in the hall of mirrors shower, look up “best baguette in Paris” on the internet and then walk to the place and buy one, feeling all happy and Parisian as I carried it home. Work, peer out the window at the workers from the fancy hotel smoking front of a gallery just over the property line of the hotel. Listen to sirens, motorcycles, and loud trucks picking up and dropping off laundry etc. for the hotel. Lunch, I’d usually just take a walk then make a sandwich at home when I got back. One day I had sushi. Rusty and I ate a good lunch at a cafe one day. Friday I worked straight through. 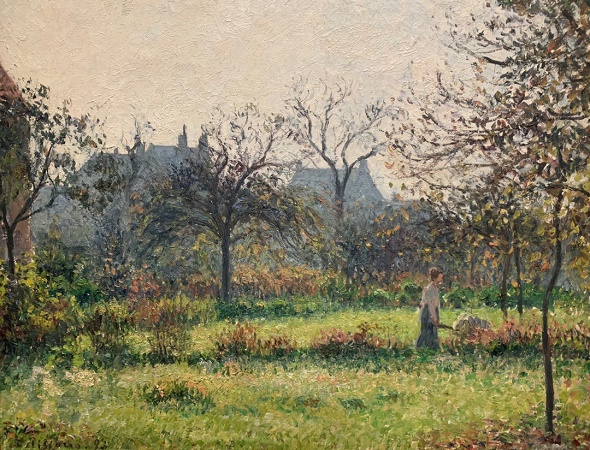 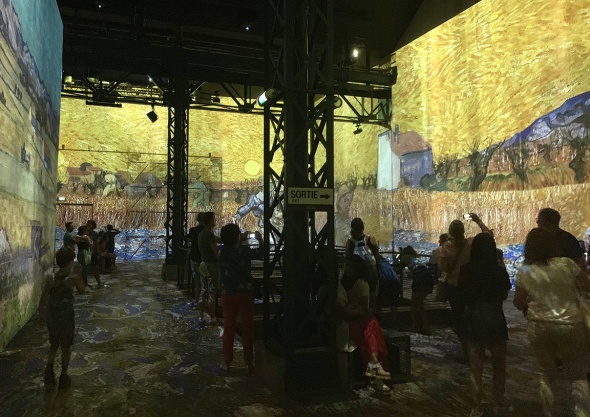 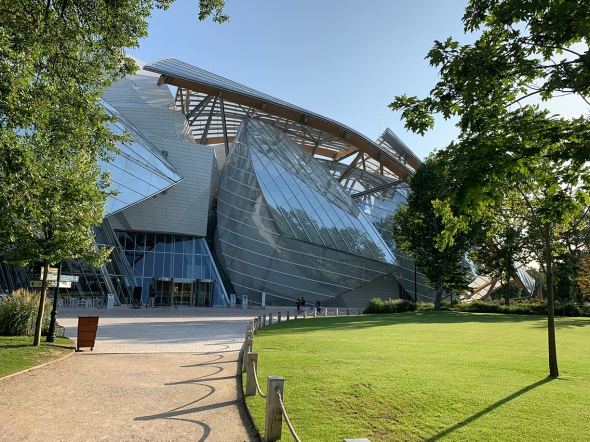 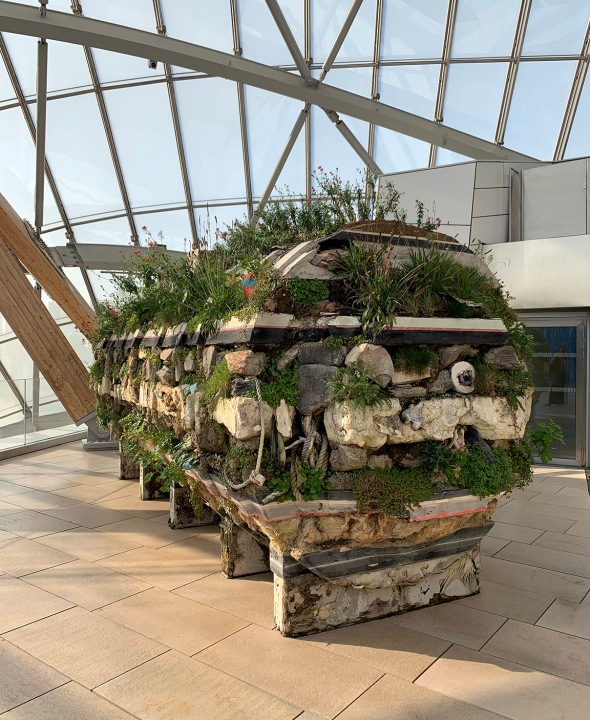 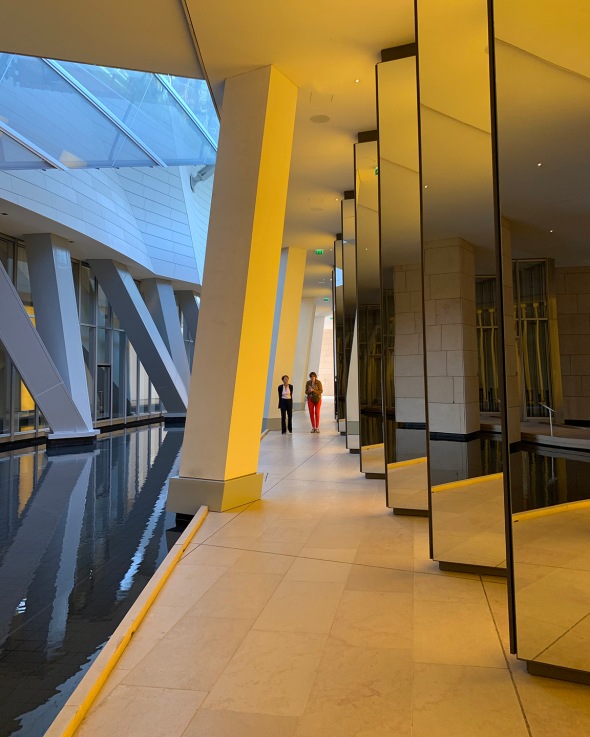 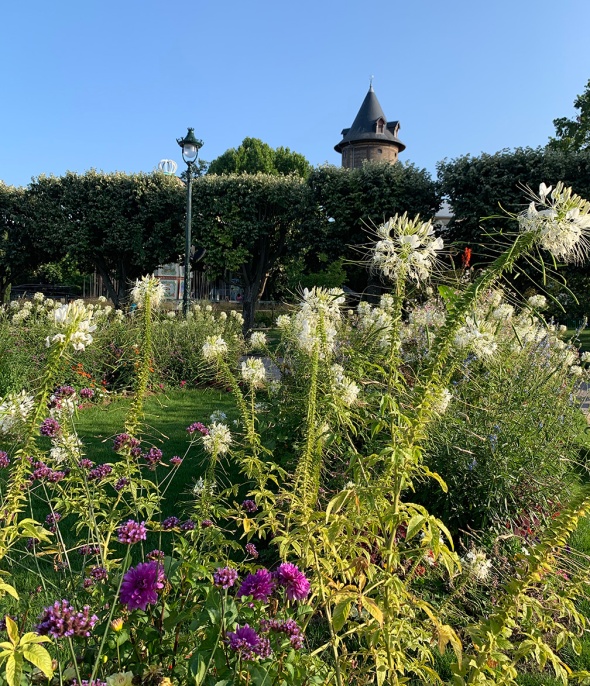 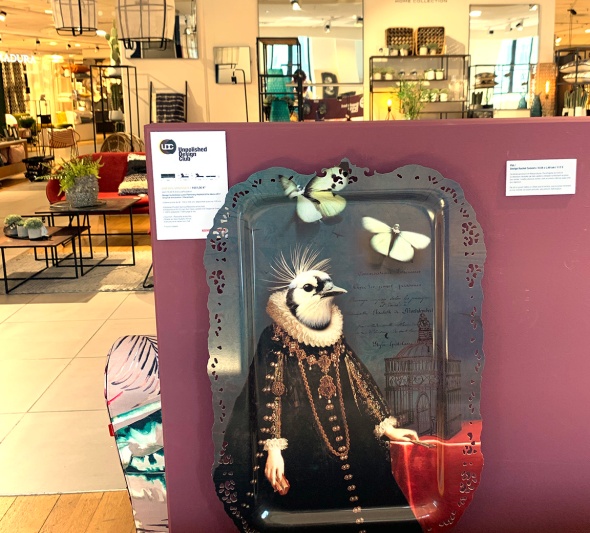 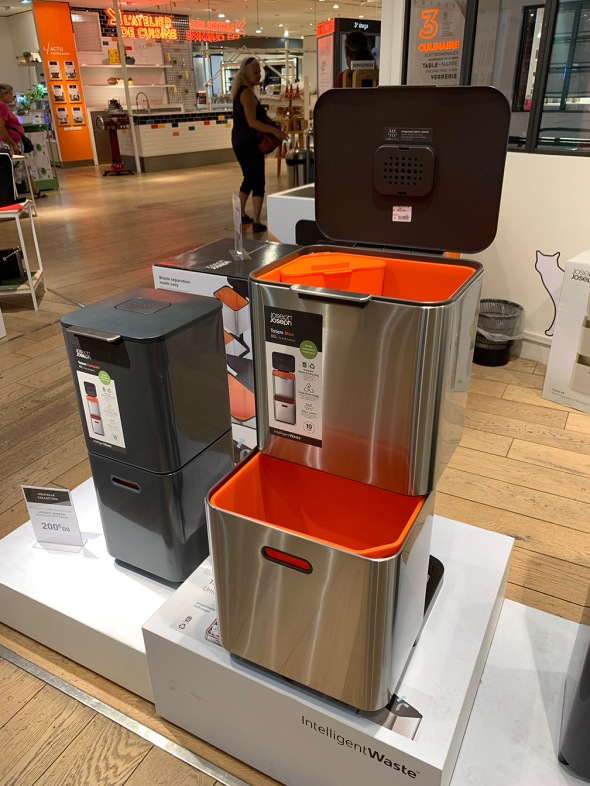 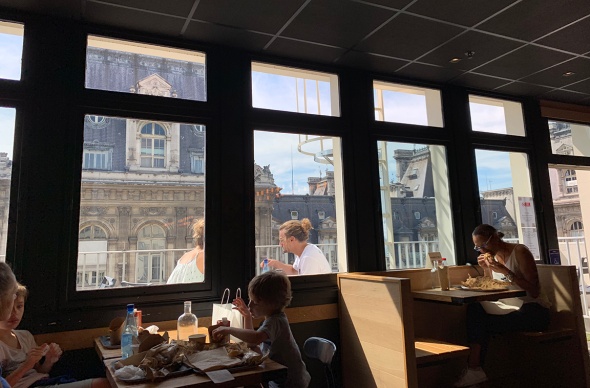 Lunch at BHV. Modern interior with old stuff right out the window. 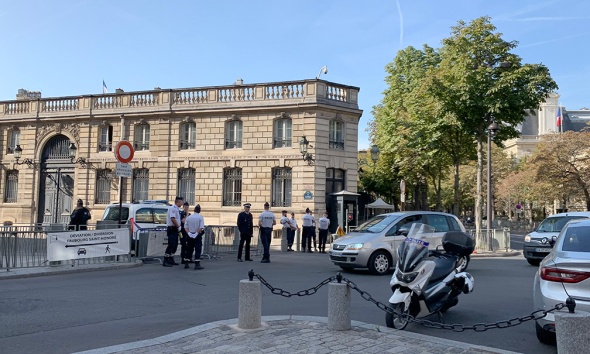 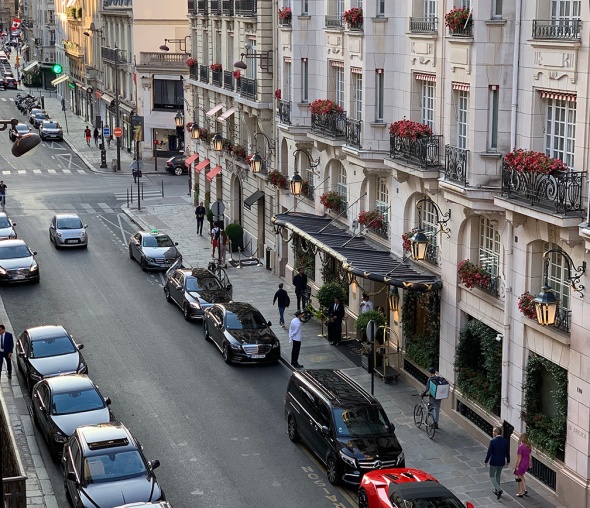 Hotel Bristol as viewed from the window by my desk

This was a good trip. I’m grateful to have a job that let’s me work remotely. This is the first time we’ve stayed in an apartment instead of  a hotel and I loved it. After the plane trip back home I swear I won’t travel again for months but I’m ready to go again. : )